I was beating myself up this month that I haven’t had the attention span to read any books but here we are with 4 books finished! My Thanksgiving road trip (to a small gathering of a total of 5 covid-19-paranoid people) gave me the opportunity to listen to two books, which doubled my monthly efforts!

Last week I wrote a draft post about not being able to listen to books lately but then I went and proved myself wrong by listening to two in 5 days! Maybe I will have an opportunity to resurrect that opinion in the future.

So which books captured my attention this month? 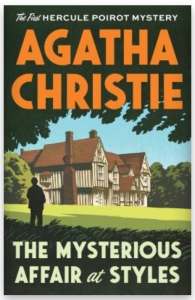 The Mysterious Affair at Styles, Agatha Christie – Agatha Christie’s debut novel with Hercule Poirot. This is the first time that I can remember reading (listening to) her writing. I am thinking that can’t be true, but right now I can’t recall actually reading others. This story is about an older woman who married a man 20 years younger, and is killed via poison. A young man named Hastings visiting the estate enlists Hercules Poirot’s help to uncover the murderer. The story is told via Hastings’ perspective and his interpretation of what everyone is thinking or doing. It captivated me and made my road trip fly by.

It was also interesting to hear the language from the 1920’s – the description of dress-up costumes by some of the family members (“a vicious Apache”) and describing one character as “a Jew,” and other references that would be phrased differently these days.

Dot Con: The Art of Scamming a Scammer, James Veitch – there had been a lengthy This American Life podcast episode years ago about someone who manipulated some scammers to foil their plans. I thought this book would be like that – and it was, kind of. It’s a series of email exchanges with different scammers to keep them engaged in their hunt for a victim. Many were quite amusing.

It might have been a mistake to listen to all the chapters at once.  I think if I were reading I would not have read every chapter nor even finished the book. Listening as a distraction as I drove across the state of Florida worked well. I would recommend it to anyone going on a road trip who wants a simple story that doesn’t require much attention and any navigation-related interruptions won’t impact the narrative.

(This links to a site that supports independent booksellers.  I will also get a small commission.)

Memorial, Bryan Washington – this was my November 2020 Book of the Month club selection, a story about a gay couple who are at a brink in their relationship when one needs to go to Japan to care for his dying father, while at the same time his mother is coming to visit. So off he goes to Japan and leaves his mother and boyfriend at their home together.

My mother-in-law lived with our family for quite some time. I thought that it would be interesting to read about how someone else coped with this situation.  Our stories were not parallel, but I found it captivating to read about this arrangement.

This story played to my need for books about relationships.  The first part of the novel is from the boyfriend’s point of view, the second from the Japanese boyfriend’s perspective and then the third is when they are finally back together.  It is well-written, believable, and the interactions and behaviors are plausible. 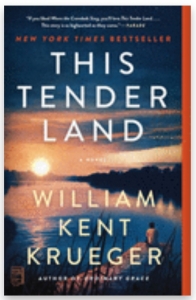 Finally, This Tender Land by William Kent Krueger, our November 2020 book club selection. As odd as it sounds, I appreciated this book more when I finished it than while I was reading it.  The story is a modified Huck Finn-esque story about 4 orphans that travel down the Gilead river to the Mississippi in 1932.

The author was trying to represent so many circumstances that occurred from the depression that none of it was believable nor captivating.  The characters were two dimensional. They also altered between different levels of maturity to fit the story.

I couldn’t figure out why the book was titled “This Tender Land.”  My after-reading research taught me that there was an opera about the depression – “The Tender Land.”  I then read more about the author’s research work for the novel, which was more interesting than the story he wrote.  Too bad.  Goes to show that good Editors are definitely needed in the book publishing industry.

All in all, not a bad round-up for this month’s reading.  Not only are there 4, but I also finished them all.