Archive for the category “Why I”

Why do we knitters love knitting?

Numbered, but not listed in a particular order (other than my chain of thought).

1. Divergent Thinking.  I can knit and sort out different matters while concentrating on my knitting.

2. Tangible evidence of time spent.  No, I wasn’t just watching TV/attending a meeting/socializing with friends.  I also knit all these rows!

3. The yarn. Such pretty colors.

5. The patterns.  So many choices.

6. Creativity. Mine, or someone else’s, or a blend.

7. Community.  Common language, always an opportunity to learn and to share.

8. Ongoing. My list of projects, the number of choices, the yarn, my stash, my queue. 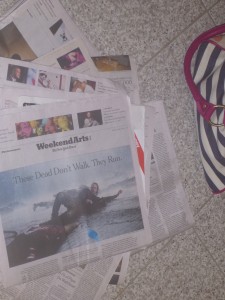 I originally wanted to write a post about why and how much I like The New York Times.  Then I talked myself out of it when I thought about the reality.  I get the paper delivered to my home. At first only during the weekdays, but now that the kids are in college, the weekends too.  But that’s not really the story. I get the paper delivered and bring it to work to read, thinking I’ll read it in between calls, at lunch, when I’m waiting for my computer to boot up, or when I just need a little break.

It used to take forever for the computer to boot up. I could get through the whole front section in the old days.  However, those computer support people “did something!” and now it boots up very quickly. Bah!

What I end up doing is taking the newspaper into work, and it sits on my desk, taunting me all day.  If I’m lucky and have the bandwidth I can read (i.e. flip through) at least one section.

I’ll admit it.  The newspaper goes back and forth with me daily, the pile getting bigger as the week wears on.  I may read some at home during dinner but end up weeding through the sections and finally taking the ones I really like home with me on Friday afternoon.  The ones I like? My favorite sections are The Arts, Style, Dining, Obituaries, Dear Diary, Monday and maybe Tuesday Crosswords (I’m a wimp) and the like.  Obituaries? Yes. I’ll leave that conversation to another post.

I like The New York Times because the writers have an edge, a sense of humor. Did you read the review last November of Guy Fieri’s new restaurant in Times Square? I even posted on Facebook about it.  Talk about cutting – and I don’t mean the silverware they picked out.  I loved it!

Tonight I was catching up on this weekend’s paper (somehow I guess by now you are not surprised) and came across Jon Methven’s Opinion on Daydreaming.  First I have to say, Jon Methven, you have a new fan! You are smart and hilarious. Your piece reinforced my need to write about why I love The New York Times.

I don’t want to have to run a spoiler alert, so go read the article and come back. Then you can read one of my favorite parts describing the rules of what to daydream about:

SEX By all means, have sexual fantasies. Sleep with better-looking people. Have intercourse in trees. But under no circumstances should you daydream about fornicating with nearby co-workers. Colleagues can tell when you’ve been daydreaming about having sex with them, and it’s an unprofessional way to spend company time. Some whiz kid is probably months away from inventing an app that can decipher whether you’re fantasizing about co-workers, or whether you’re just fantasizing about normal people who will never have sex with you.

I found this particularly amusing because I work with (young whiz kid) mobile app developers, and could just imagine THEM daydreaming at work about building such an app!

And, if you’ve read my About page then you already know how I spend (some of) my time at work!