Archive for the tag “Embrace Life”

My 4 day Whole 30 is ongoing! The premise of the Whole 30 is to reset your nutritional balance by cutting out all the psychologically unhealthy, hormone-unbalancing, gut-disrupting, inflammatory food groups for a full 30 days.  When the 30 days are complete, slowly add the omitted foods to observe how each one affects you.

I am a huge proponent of the Whole 30!  During my first trial, I discovered that I have a slight allergy to strawberries in that they make my skin itch.  So now every time I am confronted with the choice to have strawberries, or a food with strawberries in it (my local sushi restaurant has a roll with miso-strawberry sauce) I can make an intelligent decision if it’s worth the discomfort. 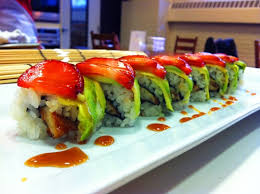 My first attempt at the Whole30 regiment was super successful! The second attempt, not so much.  I lasted about 4 days, and not fully committed.

That is only half the story.

When you finish the Whole30, you are reminded to try to live by eating cleanly, but allow yourself to enjoy life and foods with no regrets.  Just hop back on the Whole30 bandwagon as much as you can.

I learned during this go-round that I need to stop trying to do the Whole 30 completely.  I need to focus on doing it as much as I can, constantly noticing how different foods affect my body and my state of being.

I noticed that Sugar is Not My Friend.  Eating sugar makes me very unbalanced. I chew my fingernails, play with my hair, am very unfocused, and lethargic. So I cut out sugar as a general rule.  I still do not eat a lot of gluten either.  It makes me bloated, and tired.  And I eat very little cheese.  These are my guidelines now.  Not just for 30 days.  For life.  The picture below is a little extreme, but I think I do need to avoid sugar very assiduously.

Of course, I should be drinking more water.  Yeah, I may get there one day.  Not a priority!

I did not weigh or measure myself before starting the Whole30.  People keep asking me what I’ve done differently – what’s changed?  I have been losing weight!  My skin is healthier, brighter.  The Ex even noticed that my hair looks healthier.  ??? (Meaning isn’t that odd that 1- I was with the Ex and 2- that he commented on my hair???!) Bear in mind that I did not look extremely malnourished or unhealthy before.  But there are noticeable differences now.

Most importantly, I feel better.  I have more energy, better focus, a longer attention span.  I get super excited about mundane things, like getting a lot of small tasks completed in a short period of time, or leading a very efficient meeting.

That New Computer? GRRR…it has not been good to me this week.

I’ve had to refresh it which somehow erased all my added programs but saved my files.  For which I am aggravated, but also thankful.

And my network connection has been continuously lost but thankfully found at this point.

I think the worst part is that I don’t know why.

Or maybe it’s really that DDSO isn’t here to take care of it for me.

Today was a rough day.  Maroon 5’s Payphone summed it up for me:

If “Happy Ever After” did exist,
I would still be holding you like this
All those fairy tales are full of shit
One more fucking love song, I’ll be sick.

The computer is back up, without DDSO’s input.  I also need to move forward.

“Have a Great Weekend!”

I still am a little angry with DDSO for getting colon cancer and leaving me. I know it’s not his fault he got sick although if he had had a colonoscopy at the age of 50, it might have been detected sooner. But then I tell myself that this might have meant that he would have started chemotherapy earlier and he would have died before we could spend that  little bit of extra time together.

And I truly believe that the chemotherapy helped kill him. I don’t understand how dumping poison into one’s body is supposed to make you healthier.

The poison is kind of like Round Up (made by Monsanto) which is only supposed to target weeds and keep the genetically modified seeds/plants alive.

Chemotherapy medicine is supposed to target the cancer cells and not touch the other ones?

I have a friend who was diagnosed with breast cancer, in one breast. She chose to have a double mastectomy, and had one dose of chemotherapy.  The treatment devastated her. She told me that she lay down on a chaise in her backyard after the treatment.  Her neighbor called the police because she appeared to be dead.  My friend decided not to have any more treatments, changed her eating habits to all natural and many vitamins, and take her chances.  In today’s world, run by pharmaceutical brainwashing, that was a brave decision.

She is still here and DDSO is not.

Yes, I am aware there are many different variables around the two cases.  It’s all about choices. Ones that we all hope we never have to make.

Weekends are the worst for me. DDSO and I spent Tuesday evenings and weekends together. We had plans to live together.  Then he got sick; his doctors were closer to his home, my children were still home, and then he died, so we never got to that Paradise.

…as long as we’re together…

DDSO used to say “It doesn’t matter what we do as long as we’re together.”

We were somewhat exclusive when we were together. We enjoyed each other’s company so much that we were fine not making social plans.  We did get together with friends every now and again, but it wasn’t necessary.

I am going to pick myself up and go do the same, or the same type of, weekend activities that DDSO and I did together. Now I get to go to Trader Joe’s, do work around the house, garden, make gazpacho, etc. on my own, or with friends.   Even though the activities are the same, the experience is not. Life is different.

Disclaimer: This post is merely reflecting my personal experiences and observations. I am aware that chemotherapy has helped many people overcome cancer.  I do not intend to disparage anyone’s decision to partake in chemotherapy.  It’s all about choices.

My DDSO hated reality TV shows. After he passed away, I started watching Long Island Medium. I could feel his spirit next to me admonishing me for watching a reality TV show about spirits.  “You don’t need a medium or a reality TV show to know that I am with you!” he’d tell me. It was just like him. I’d laugh and cry at the same time.

Teresa Caputo, the Long Island Medium, would probably never be my friend. She would probably drive me crazy with her carrying on over her regular life.  But she moves me every time she does a reading and brings meaning to the person who is grieving.  She has helped me figure out what life is supposed to be like now.  The latest lesson I learned was when one of the spirits told a loved one to “Embrace Life.”

DDSO always wanted me to be happy.  He would sacrifice his wishes to make sure I was happy.  What a lovely man.  Since he was on chemo and then he passed away, I have been struggling with how to be happy.  Is it “moving on?”  “Letting go?”  I think “Embrace Life” is perfect.