Archive for the tag “fair isle”

I set a goal of “3 Patterns” for the past 6 weeks. It was a bit vague, but I think I really meant it just to spur my creativity and branch out. It could have been read 3 Patterns, write 3 Patterns, knit 3 Patterns, crochet 3 Patterns…just do something with 3 different Patterns!

I met my goal and tried 3 knitting patterns, completed 2, 1 was a success. Smile. I am more about process than results, so I am happy that I did 3 Patterns. Never mind the results! 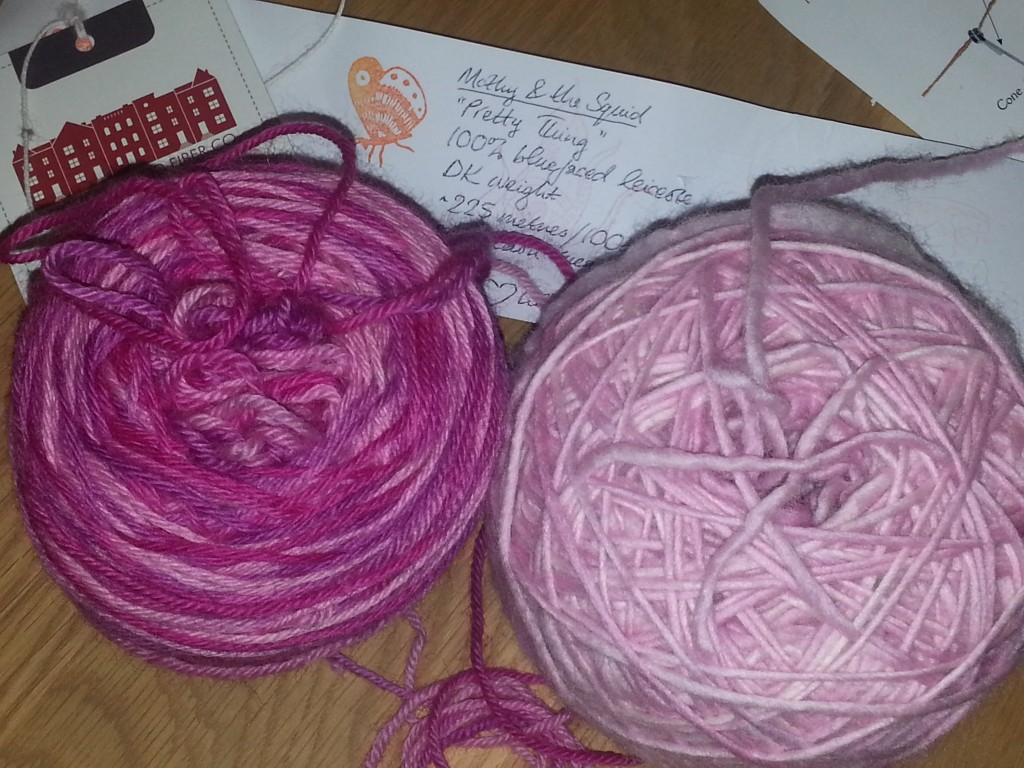 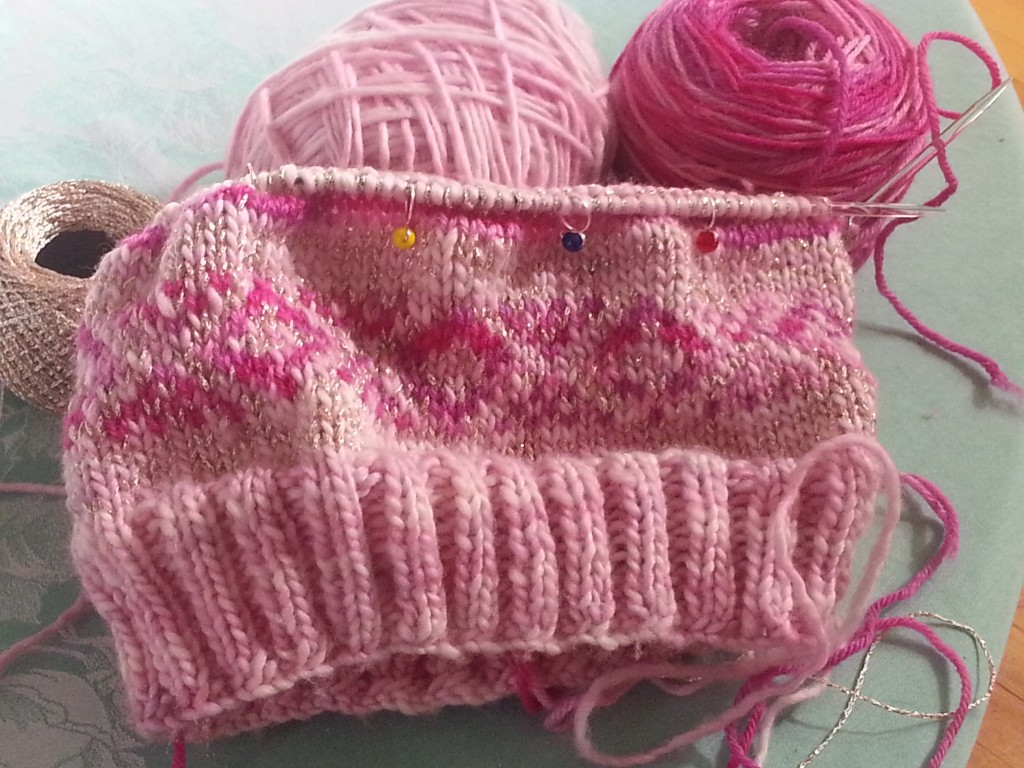 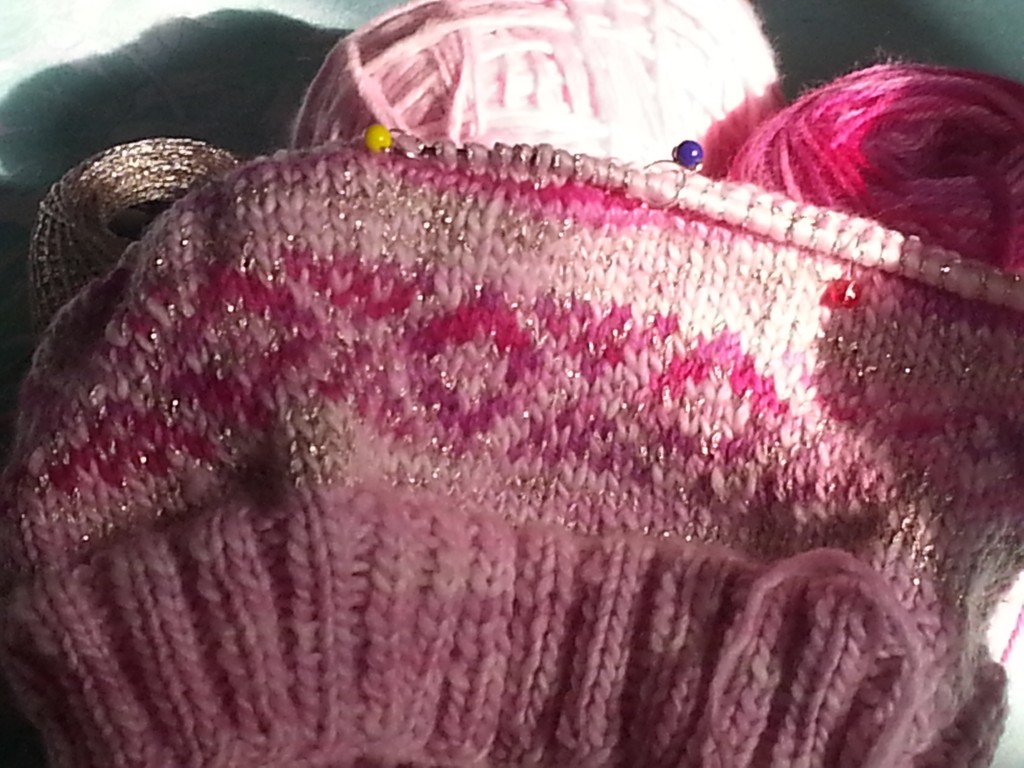 This is the Neighborhood Fiber DK in Victorian Village and a variegated pink DK that I bought on Etsy from Mothy and The Squid. I also used a gold strand with the Victorian Village outside of the ribbing. What fun colors!

I really need to read other winter hat knitting patterns, because once again, the final product turned out too big…but pretty! 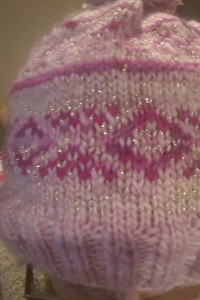 2.  The Summit Shawl – Mandie Harrington is a genius! She created this beautiful shawl, and as I knit it, I continuously marveled at how brilliant she is to have created this pattern. 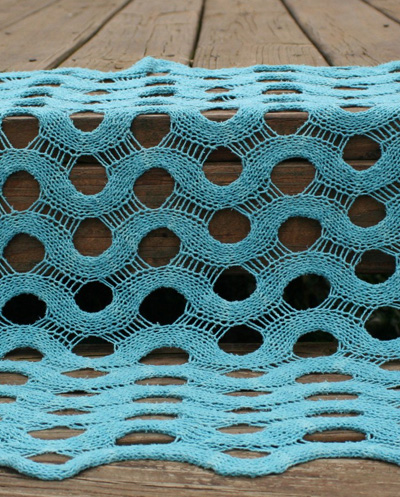 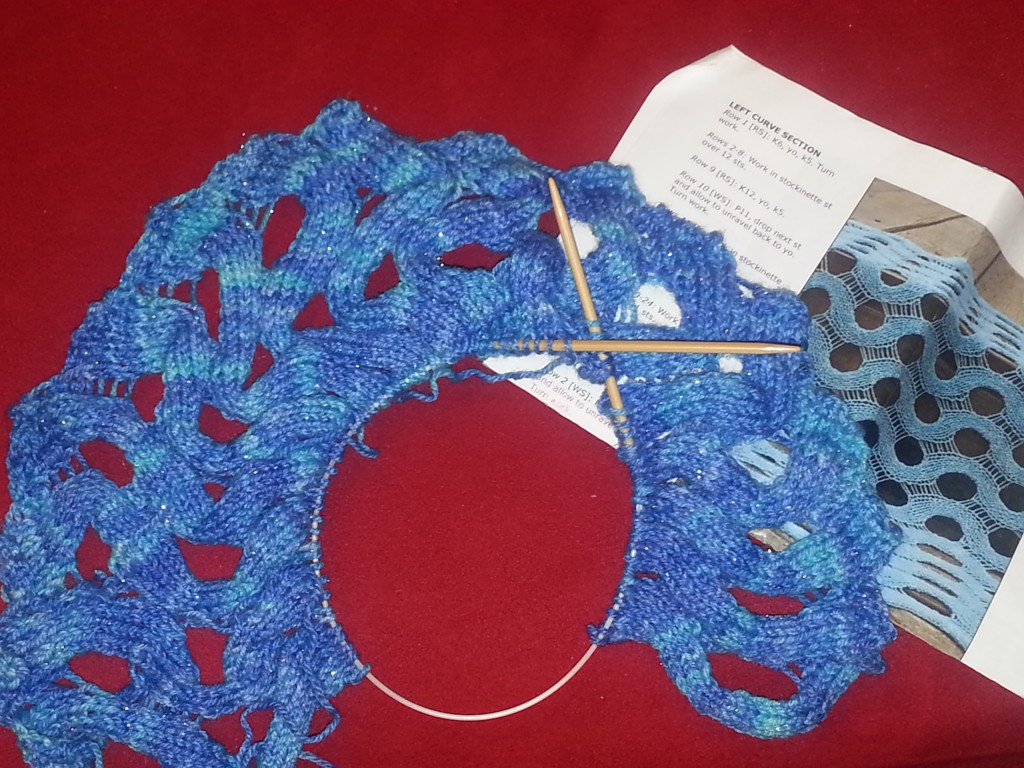 3. Boa scarf. I was asked by this little princess to make a scarf. 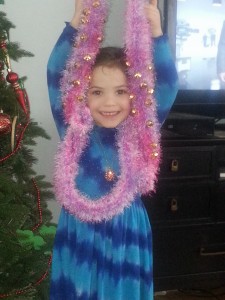 I used a pink fur yarn, a variegated pink/purple fur yarn, a deep pink strand, and knit in bells at each end! 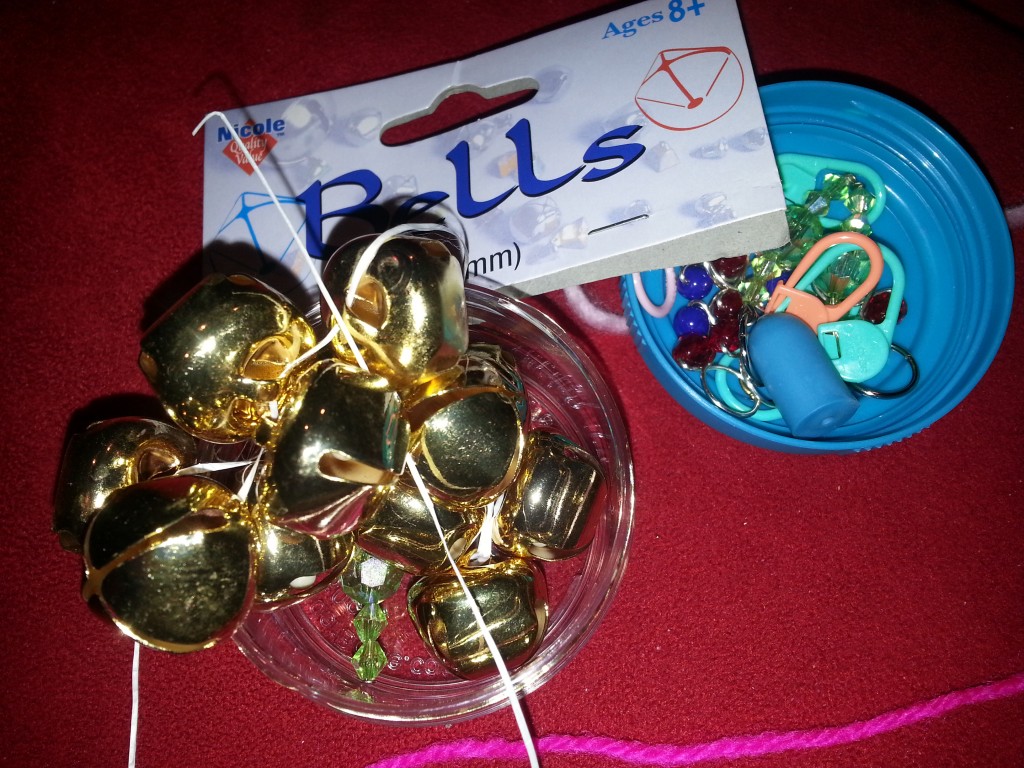 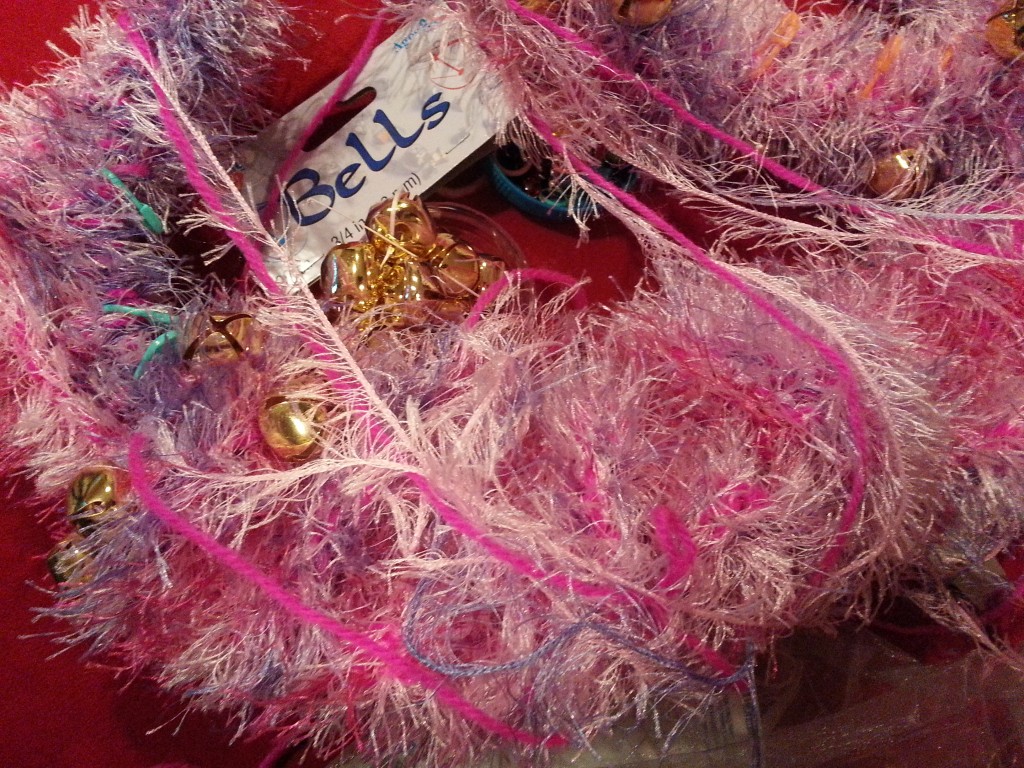 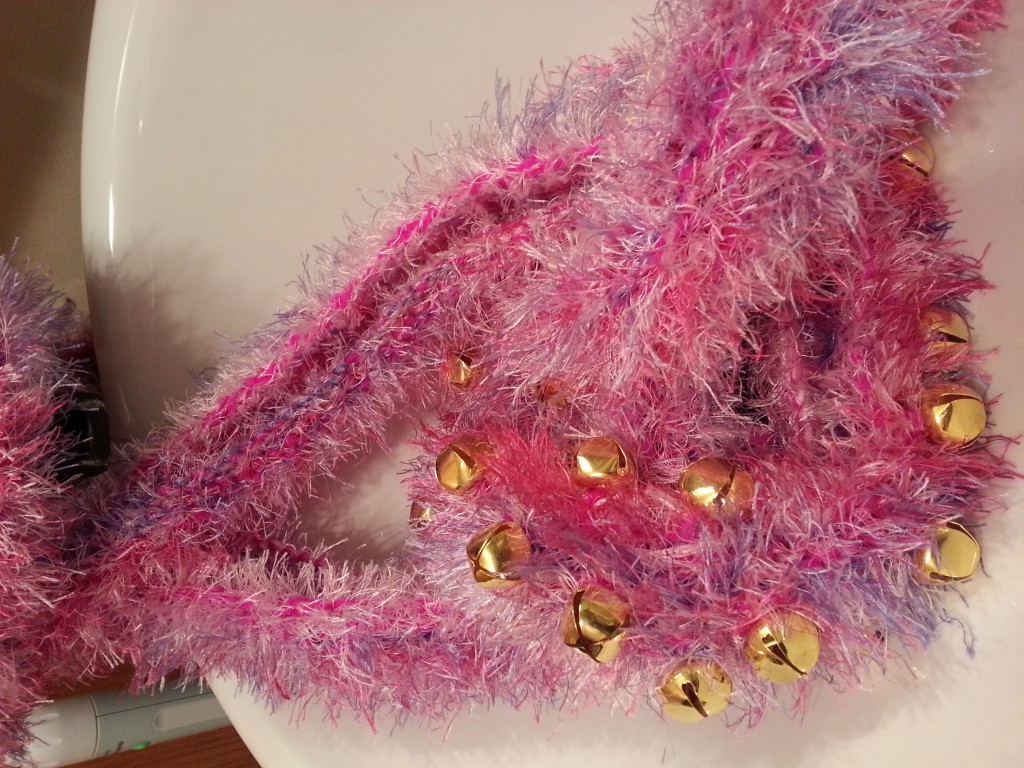 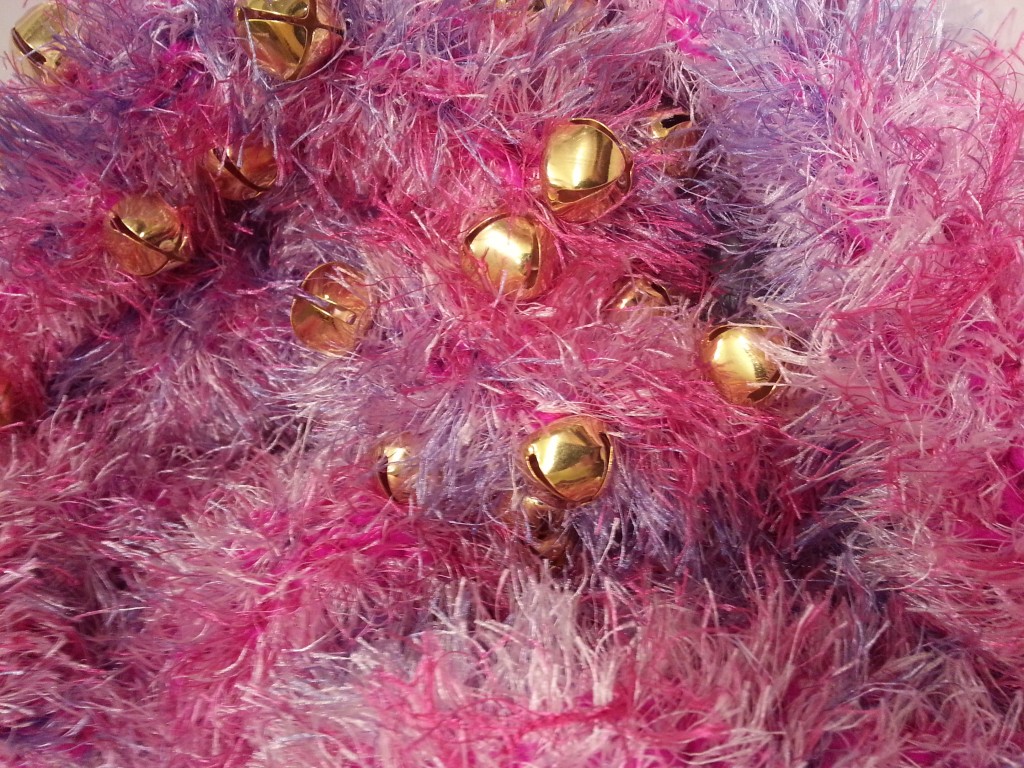 I think I loved it more than the recipient!  Though she had fun with it too. 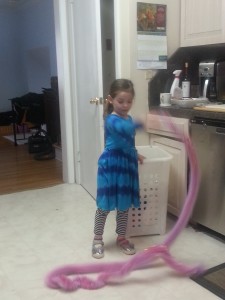 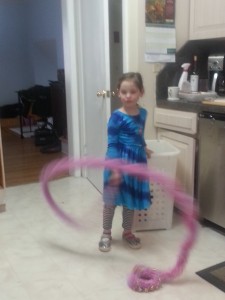 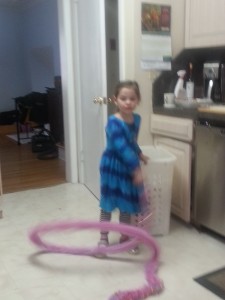 I’m late to report on my January 2015 Reading!  That’s because there wasn’t much reading going on. I was trying to remember what I did instead of reading, and all I could think of was knitting the Iodine Cowl.

A friend recommended that I listen to books instead of reading, so I can knit and read at the same time, but I just really prefer to read than be read to…unless I’m in the car (driving or not!).

This would have been zero, except that a book that I back-ordered arrived this month: 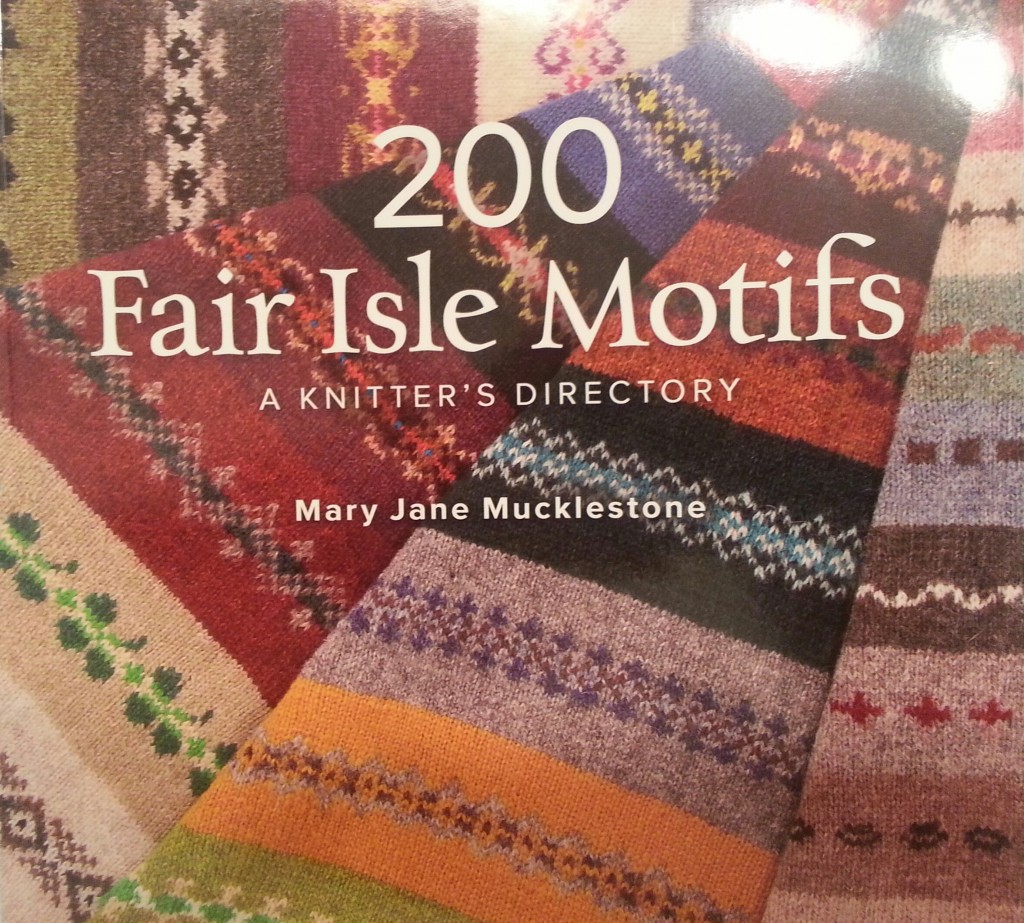 Well, if I had to buy a book in January, this was a great one!  Each pattern is shown in at least two color diagram choices (like cross-stitch) and then with a chart to follow. There is always a knitted sample of one of the designs at the top of the page. 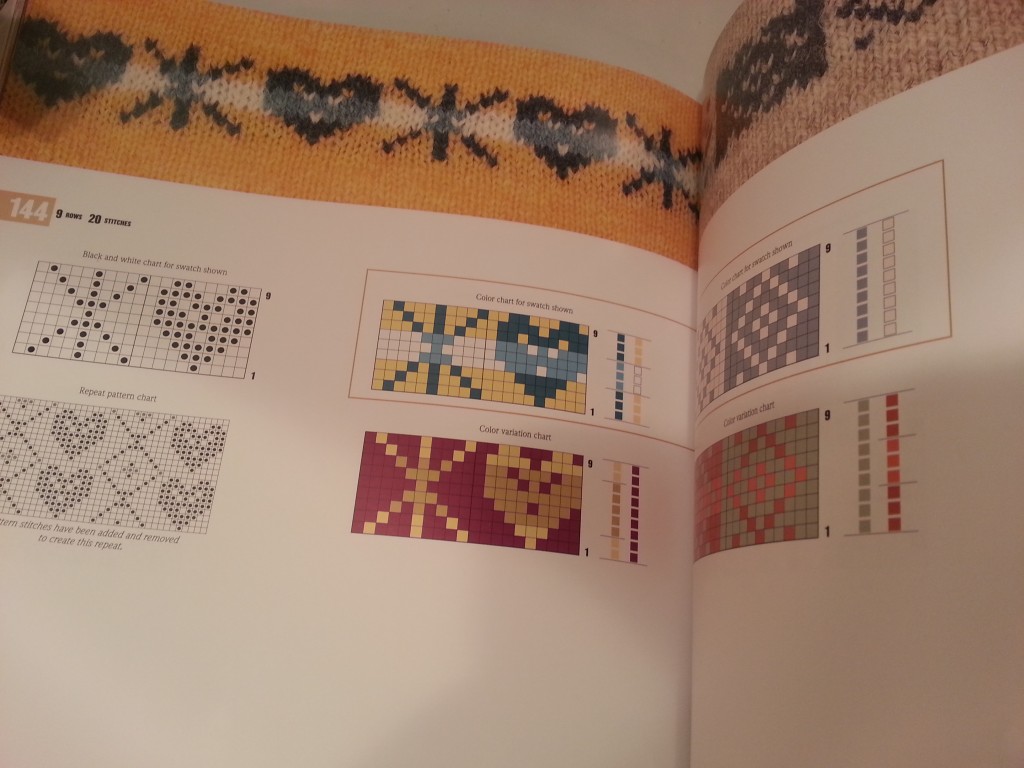 I already have a project in mind that will use at least two of the designs, which I hope to share the end results with you soon…

First, I have to say that I don’t see the appeal of Mary Kay Andrews’ writing.  After two chapters, I couldn’t bear to waste my time anymore and returned it to the library ASAP.

I have no idea why I wanted to read The One and Only, but it had been on my Read From The Library list for awhile.  It’s about a young woman who likes sports, and her best friend’s family, where the father happens to be a college football coach. There’s obviously a lot of sports talk, which is not that enlightening to me, but the relationships are pretty believable, which is why I made it to the end of the book.

The Betrayers and Leaving Time were the selections for my two book clubs.  I read through each of them, not really engaged in either.  The Betrayers, at a high level, is about an Israeli political persona who basically runs away with a (younger) mistress to a Russian seaside town where he and his family visited when he was a child. After our book club discussion, I had a little more insight into what could make this book more interesting – the history of Jews in Russia, the Russian equivalent of the McArthur era, and even some insight into Israel.

Leaving Time was my first experience reading Jodi Picoult’s writing.  Interestingly enough, it was about elephant relationships and human relationships, and sometimes a elephant-human relationships.  I say “Interestingly enough,” because I have always been fascinated by elephants, and also have donated money to the Elephant Sanctuary in Tennessee which was the basis for much of the book.  I was not captivated while reading the book, and had to push myself through certain parts.  However, by the end and when it was over, it gave enough to leaf back through it, looking for hints of what I missed to bring it to its conclusion (which I now understand is typical of her stories).

I would have to say that thanks to my book club discussion, The Betrayers was the most interesting book I read this month.  I’m sure if I had been more prolific, my choice would be different. 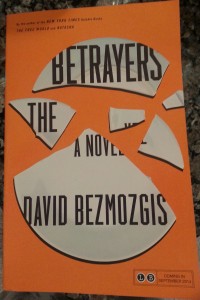 My Kind of Game Show

For some reason I have been recording Hollywood Game Night. I do not follow celebrity news, do not know many of the celebrities on the show, refer to the show as Extroverts Extroverting Themselves, and have no idea how the participants can connect in the final round in describing so many so-called famous people.  It’s like a study of another world.

It made me think –  In what kind of Game Show would I excel and be interested?  Here are the clues that I thought would be fun:

I was at work the other day, lamenting with a co-worker about what we would rather be doing…turns out we’re both knitters!  I’m betting she would have the answers to the above…

Knitters Unite! Let’s go to the TV Execs and ask for a show that would really be interesting!  Knitters Having Fun talking about the Knitting Culture!

I had ordered prints of many of my Fair Isle inspiration photos awhile back and wanted to put some of them in a collage frame. When I went shopping, I realized that collage frames are not for me.  They’re too restrictive, and don’t have the cut-out size options I wanted.  On one hand, I could take it to the extreme and design my own mat openings, but….let’s be realistic!  So I came up with a better solution.

I bought a simple frame, and some black wrapping paper.

And then I had to decide my “most inspirational” photos.

Of course nothing is set in stone so I can switch them out as needed, or even purchase and set up more frames.

The final products below. I love them both!

I love the detailing in these photos!

I must confess that I like this one the best!

In January, I attended the Vogue Knitting Live conference in Manhattan. I participated in four classes and was inspired in each!
I was lucky to get in the Fair Isle Inspirations class with Debbie Bliss. I love Fair Isle. I love mixing colors and patterns – it is a perfect fit for me!  And Debbie Bliss is the master (mistress?)!
The class consisted of a short PowerPoint presentation of how she derives inspiration. Then she gave each of us some sample yarn, told us to take out our graph paper and get started. We looked at each other. This is it? This is the class? We were annoyed, angry, but wanted to make the best of it so started working.

Here are some of the samples she brought. 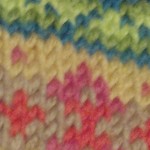 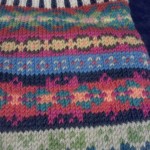 My kind of patterning! 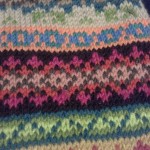 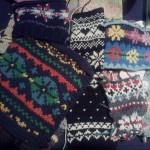 Whirlwind of colors and patterns! 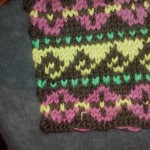 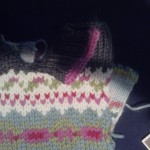 More muted than others!

Well. We each did a couple of designs and then had the opportunity to consult with Debbie one on one to get her advice and feedback.
It turned out to be the best class of them all!
Here are some of the photos I took after the class. For some reason I found myself drawn to beiges and muted colors. Very unlike me.  An interesting turn of events. 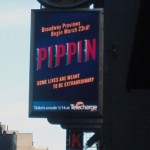 I loved Pippin the first time around! 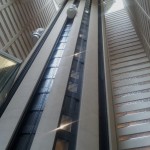 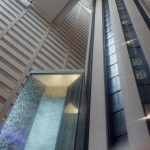 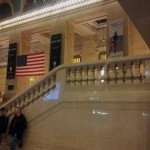 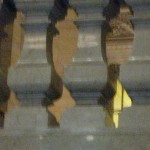