Archive for the tag “giving up chocolate”

Chocolate Babka is NOT on the Whole30

Chocolate Babka is a wonderful, heavenly, delicious dessert made from chocolate, sugar, butter and flour.  Here’s a great recipe from the Smitten Kitchen.  Trader Joe’s describes theirs as:

Chocolate Babka is crafted from scratch, in small batches, using a sweet yeast dough that’s covered with a rich chocolate filling, and twisted by hand before being placed in a high loaf pan to be proofed and baked. The generous application of chocolate reveals itself as swirls in the finished product when the Babka is sliced.

DDSO’s son and girlfriend came over and brought a Chocolate Babka gift.  Oh, my!  Toward the end of their visit, I made tea and we cracked open the Babka.

I cannot resist the heavenly concoction of chocolate, butter and sugar rolled in flaky layers of dough, and then baked and melded into a sweet luscious delicious mouth watering gooey dessert.

Devouring more of the babka after my guests left was shameful, but oh so delicious!  I finally threw the leftovers out after the 5th “this is the last bite” (yes, only 5!).  And I took the garbage out to the curb.  Yes, I know myself.  And did consider having a 6-10th final bite in the evening before repeatedly remembering it was already in the trash bag, in the garbage can, on the curb waiting for tomorrow’s trash pick up.

Did I mention Chocolate Babka (or any Babka) is not Whole 30?

And boy, did I feel it.  The rest of the day was L E T H A R G Y personified.  I could not do a thing. I was tired, unmotivated. My body must have been in shock.  All plans…out the window!  I barely moved, binge watching The Last Alaskans (a great show!), and finally late in the evening managed to get myself up and into bed.

I forgot the next day about my fall from grace, or my fall into delicious heavenly but oh so dangerous chocolate delight. I went to work and found myself highly emotional. I got tears in my eyes when I received a very unprofessional email from a colleague who was trying to throw me under the bus.  Luckily I had enough sense, professionalism and experience not to respond in kind, and instead set up a meeting with my manager to let her handle it. I also got tears in my eyes during a staff meeting in which the Director of our department came in and thanked us for our work.  He wanted to acknowledge us and started with me, telling everyone else on the team what I do and what a “value add” I contribute.  Oh my!

Well, sometimes I need to fall off the wagon to remember why I’m on it.

No Dairy, Caffeine or Chocolate?

I was having trouble sleeping last month so I decided to do a trial of not consuming dairy, caffeine or chocolate.

Dairy makes me all phlegmy so when I lie down it blocks my throat passage.

Caffeine may have been causing me to not fall asleep easily.

Chocolate has caffeine. Boo! Hiss! Decided to stop eating it, for a month anyway.

This all started on December 29th, along with my already mostly-in-place habit of not eating wheat products or processed foods.

Surprisingly, what I miss the most is…a nice cup of coffee, it could even be decaf, with cream and sugar.

Also surprisingly, I don’t really miss chocolate.  I went out with a friend last night and we reviewed the dessert menu. All 5 offerings had chocolate (most had wheat too).  I had no trouble saying, “nope, not interested.”

I also found that it’s much easier to say “No” now.  Someone had brought in bagels and cream cheese at work.  Before I might have said, well, maybe I’ll have a little cream cheese, and then would have ended also having a little bagel.  Now that I’m not eating dairy, it was very easy to just say No to the entire offering.

I also like that I give myself complete freedom to have anything I want….and then surprisingly end up having what I want to want!  I had not brought my breakfast to work today and had to get something in the (dairy-laden, gluten loaded) cafeteria.  Walking in, I decided to have a (flour) wrap with eggs and maybe bacon. I used to get it with cheese, but absolutely knew I did not want that today.  By the time I was ordering, it was eggs with sausage. No gluten, no cheese, no problem.  Without a thought.  I love it.

I also found this wonderful product that helped me through the holiday season. 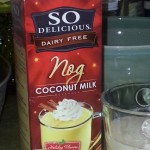 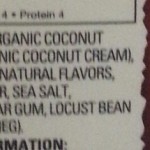 This stuff is awesome!  It tastes delicious and doesn’t leave that “not quite satisfied, but I shouldn’t have done it” feeling at the end.  Too bad it’s seasonal. It would also make great ice cream. Next year…

So how am I feeling?

I have gotten compliments that I look good and that my skin is “so clear.”

I feel good. I don’t feel tired when I wake up. I go to bed at a decent hour instead of getting all those second and third winds that keep me up. I’m sleeping better for the most part.

Most of all, I’m proud of myself for making it a whole month, and continuing on…because it feels good.