Archive for the tag “Lucy Neatby”

Finally! The update that I’ve been waiting to write and to show you what I’ve done with that beautiful yarn from Shunklies, through Etsy.

I finally decided upon a crocheted scarf that would more clearly display the segue from one color combination to the next.  I also included a couple of rows of white to show off the colors better. (One of the tips from Lucy Neatby in my Vogue Knitting Live class, Various Variegations, last year.) 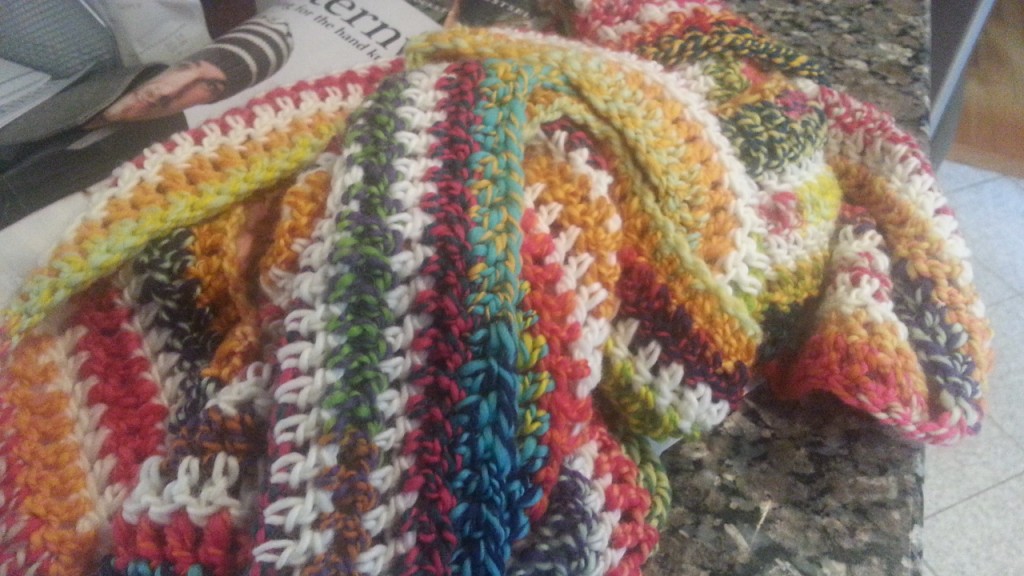 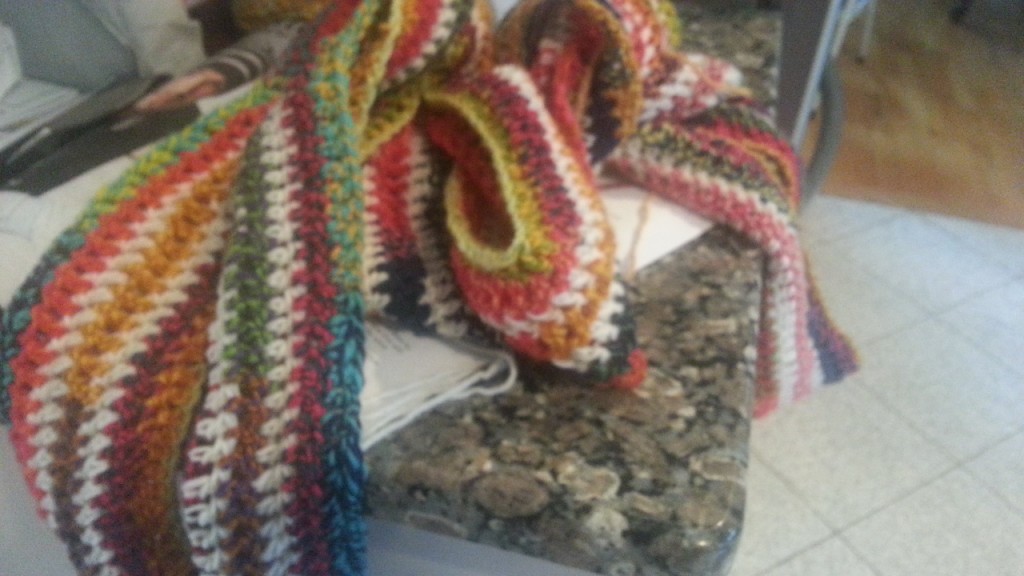 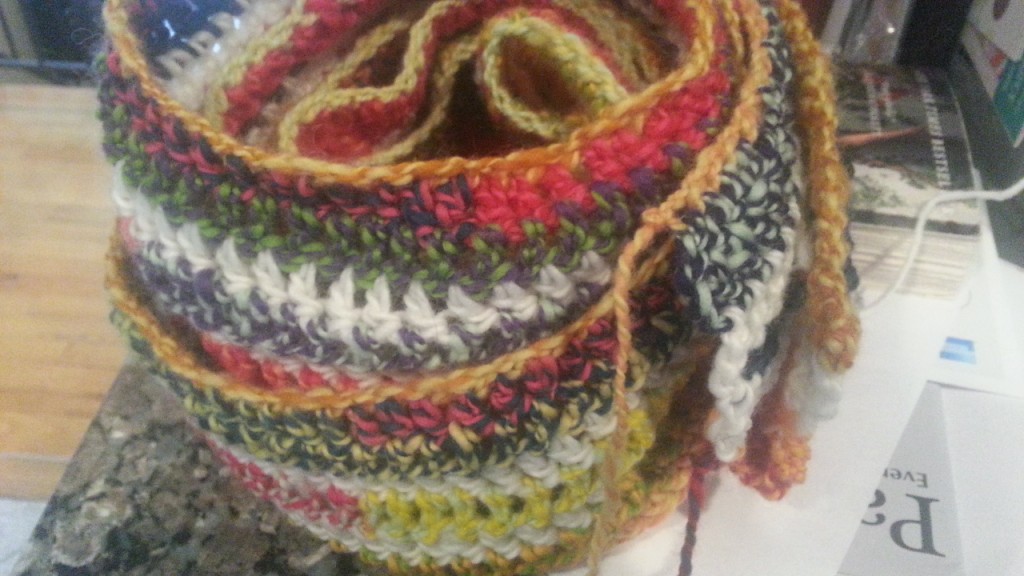 …and I don’t know if you can tell, but it is really long!

I’m pretty sure I am going to sew the ends together, so that when I double or triple it to wear I don’t have to worry about it coming apart.

…but wait! There’s more!  I decided to use up the leftover yarn by making a long i-cord that can be used as a necklace or scarf or wrapped around my wrist. 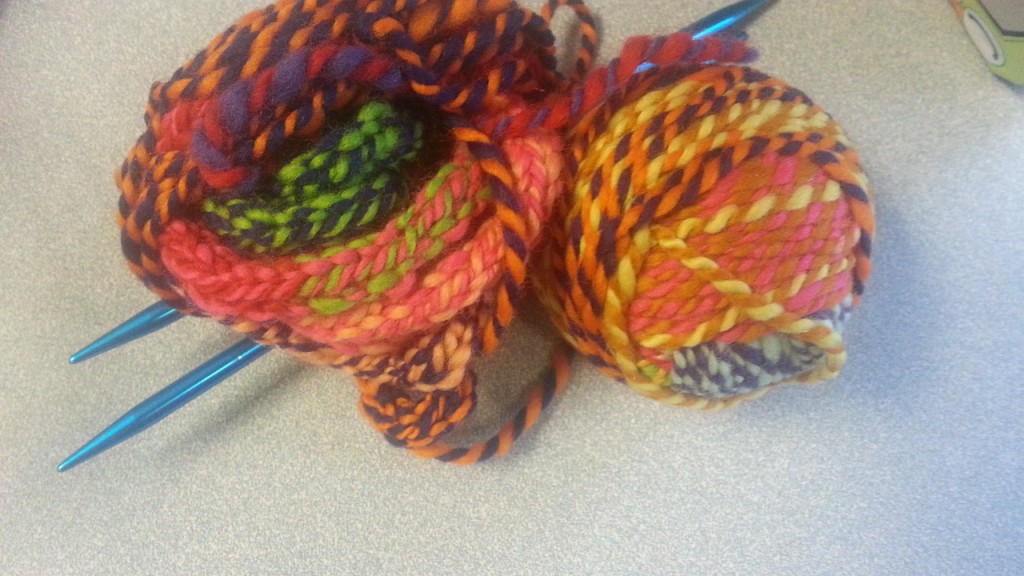 It’s not done yet…but it sure is pretty… 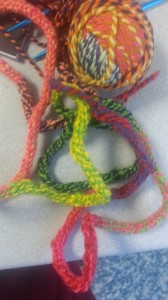 and then when that’s done…more projects await… 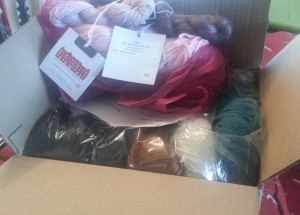 Thanks to all the Black Friday / Cyber Monday specials…and this yarn was so lovely. I know I’m eventually going to get some more!

My Kind of Game Show

For some reason I have been recording Hollywood Game Night. I do not follow celebrity news, do not know many of the celebrities on the show, refer to the show as Extroverts Extroverting Themselves, and have no idea how the participants can connect in the final round in describing so many so-called famous people.  It’s like a study of another world.

It made me think –  In what kind of Game Show would I excel and be interested?  Here are the clues that I thought would be fun:

I was at work the other day, lamenting with a co-worker about what we would rather be doing…turns out we’re both knitters!  I’m betting she would have the answers to the above…

Knitters Unite! Let’s go to the TV Execs and ask for a show that would really be interesting!  Knitters Having Fun talking about the Knitting Culture!

Back from Vogue Knitting Live NYC!

VKL NYC was this weekend! I took the train into the city early Saturday morning and was ready for the Registration table to open up at 7:50 AM.  (Egads!) I checked my coat and my suitcase, registered, went to the all-purpose store and waited in line for 30 minutes to buy a coconut water and a grapefruit juice (you’ve gotta love NYC!) for almost $9 (again, feel the love!). My first class was Ha! Fooled You! with Melissa Leapman.  Last year I took Melissa’s Reversible / Double Knitting class, and was very inspired.  I bought wonderful yarn, picked out a pattern, and hope to start that project this year!  This year’s class was about achieving stitching skills without as much effort.  Well, that was the premise.  The first project was to do a form of intarsia but with only one color per row, using slip stitches instead.

It only really works when you have a pattern with at least two rows of the same pattern, so you can slip the string in the same spot as the previous row to bring the color up.  An interesting concept, and I have seen similar patterns before, so it was a good exercise. Next was mitered stitching, also using slip stitches.  Similar practice as the previous one, but using more garter stitch. This one bored me as I didn’t see myself ever doing it.  Too symmetrical to keep my interest.

Regardless of whether I’m going to use these new tricks, Melissa is very outgoing and entertaining, knowledgeable and creative. I would not hesitate to take another class with her in the future. On to the lecture on Creating New Stitches by Norah Gaughan.  Norah showed many pictures of what inspired different stitches and patterns that she created.  One of the best insights was about this book, Steal Like An Artist, which apparently speaks about how no one can be creative without being influenced by what is already known.  I was particularly impressed by the Salvador Dali quote: “Those who do not want to imitate anything, produce nothing.”  The lecture was very interesting, and it was good to see and hear this creative designer in person. The afternoon was spent in Lucy Neatby‘s Various Variegations class.  This woman is wild! I wish I had taken a picture, but try to imagine a middle-aged woman with BRIGHT pink, purple and blue hair, wearing a floral dress, with one brown stocking and the other blue, and one pink boot and the other one turquoise. I kid you not.  I should have gotten a photo of me with her so that my friends could see that there is someone out there even crazier about colors than me! I learned in Lucy’s class that there is no magic solution or formula for working with variegated yarn. It’s a bit mathematical and you have to be willing to “cut and paste” with variegated yarn to get some designs to work. We tried some different patterns that highlight variegated yarn and it was a good discussion.

I visited the marketplace and was underwhelmed and overwhelmed at the same time. There were fewer vendors than before, but still a lot to look at. I ended up buying two skeins of yarn and a bag from Yarn Pop that I had previously seen in a Vogue article. I was hoping to buy some more Soak, but they didn’t have a booth this year. 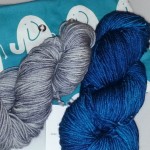 I attended the Gala dinner, found a seat at a table with some nice ladies, and enjoyed the dinner.  There were party favor bags for each guest. I was delighted! It included 3 skeins of yarn (Rowan, Malabrigo and Louisa Harding), stitch markers, garment wash, needles, and so much more!

They had many raffles throughout the evening, and I won…another yarn pop bag!

Barbara Kingsolver was the guest speaker, and she spoke about her farm and raising Icelandic Sheep. I had read her book, Animal, Vegetable, Miracle a few years ago, so some of her talk seemed repetitive, but it was still entertaining and engaging. The next morning while I was enjoying my breakfast, I saw that Barbara was having her breakfast with one of her favorite designers, Norah.  I was thrilled that I recognized them because I am usually oblivious. On to Leslye Solomon’s Finishing Sweaters class. Wow! I had forgotten how personable Leslye is, as I had taken another of her classes two years ago. She is very knowledgeable, friendly and engaging.  We spent a lot of time talking about swatching and gauges, which must be taken seriously (much to many people’s dismay, though I do swatch and don’t find it an issue).  But then she showed us the mattress stitch and an easy way to do the kitchener stitch. Now I am almost inspired to do a pieced sweater instead of one in the round.  When I knit in the eighties, I used to send my pieces to my aunt who would sew them together for me.  Now I feel more confident and less intimidated to do them myself…”Now” is NOW after taking this class. Taxicab to the train station, caught the express and I was back on home turf in less than two hours after packing my knitting supplies in the class. What a whirlwind weekend. What fun! I can’t wait to start my new projects and see what classes I’ll take next year. Oh, one more thing.  Look at this knitting inspiration – the carpeting in the hotel room…

I registered for the NYC Vogue Knitting Live yesterday!

I registered for 3 classes and 1 lecture, and am attending the Gala dinner with Barbara Kingsolver as the guest speaker.

Although it starts on Thursday evening, January 16th, I am going for Saturday and Sunday. Last year I took 4 classes, 2 on Saturday and 2 on Sunday, and was absolutely Exhausted by the time the 4th class started.

Yes, I am excited!

However….I am currently going by myself.  I know I’ll be fine and have fun, and meet new people.  Still….Anyone want to join me?