Archive for the tag “pbs”

I ate entirely too much gluten this weekend.  Of course I feel much better when I eat no gluten at all. I have not been diagnosed as celiac nor as gluten intolerant. However, I do notice that I become extremely bloated, tired, lethargic, and feel as though my lungs are congested after I eat it.

So why on earth did I consume a sausage roll after playing golf on Saturday? (For those not in the Northeast, a sausage roll is similar to a calzone – sausage, peppers, onions and cheese baked in a pizza dough, served with a marinara dipping sauce.)  I was starving, and it seemed like it would be filling.  It was delicious.   But the after-effects reminded me why I do not eat that kind of food.

Imagine my surprise to realize that I am now finding myself absolutely addicted to The Great British Baking Show! This is a British baking competition where each week, the recurring contestants referred to as “the bakers” face a 3-round challenge, and at the end of the episode one is named The Star Baker and another is sent home. 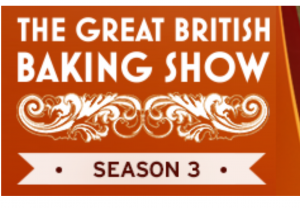 It is fascinating how these amateur bakers create wonders!  The judges and the tasks are extremely intimidating and the hosts are enjoyable.  Ready, Set, Bake! 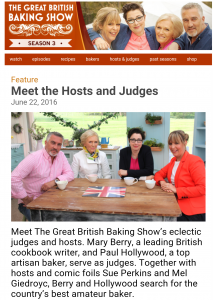 The funny thing is that I try not to eat gluten, and all the recipes contain it. Yet, that doesn’t make it lose any appeal.  It’s still wondrous seeing these bakers make these creations.

Typically, with most TV shows and movies, I am trying to catch up to see what everyone’s talking about.  I found out tonight that I’m actually watching the current season (at least current in the US – it may have aired already in England).  That’s why I thought of sharing it with you!

But I’ll save my own creativity to knitting and beading (and avoid gluten consumption)!