This is the reason why I always try to include links for deals for cross stitch products on my offers page.  This post is about me not assuming you knew why they are included.

I have one of the best books – a Reader’s Digest Big Book of Cross Stitch Designs – that I bought for this very purpose.  Its designs are simple to follow and range from basic to complex in its colorwork. 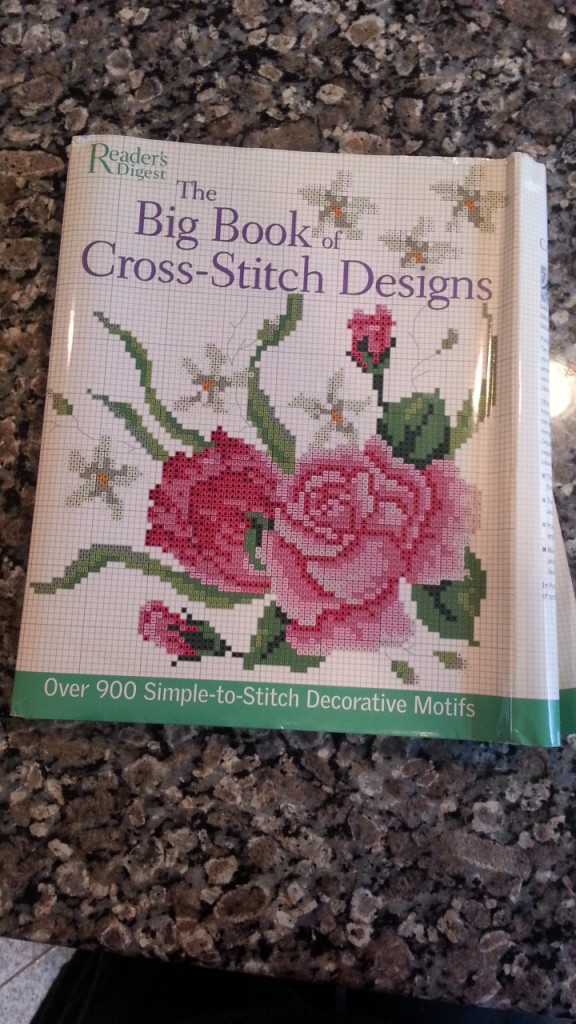 I also subscribe to Jenny Hart’s sublime stitching newsletter. Her designs are for embroidery, not cross stitch, but I have ordered some of them to incorporate into knitting as well.

I love the crossover from one medium to another.  There is a woman who displays her art of prints focused on yarn and knitting stitches at the Vogue Knitting Live shows. I can only wish that I were that talented! (I will update the post with her name and works when I find it – or after the next VKL if she is showing there again.)

Here are some cross stitch inspirations that I just love – 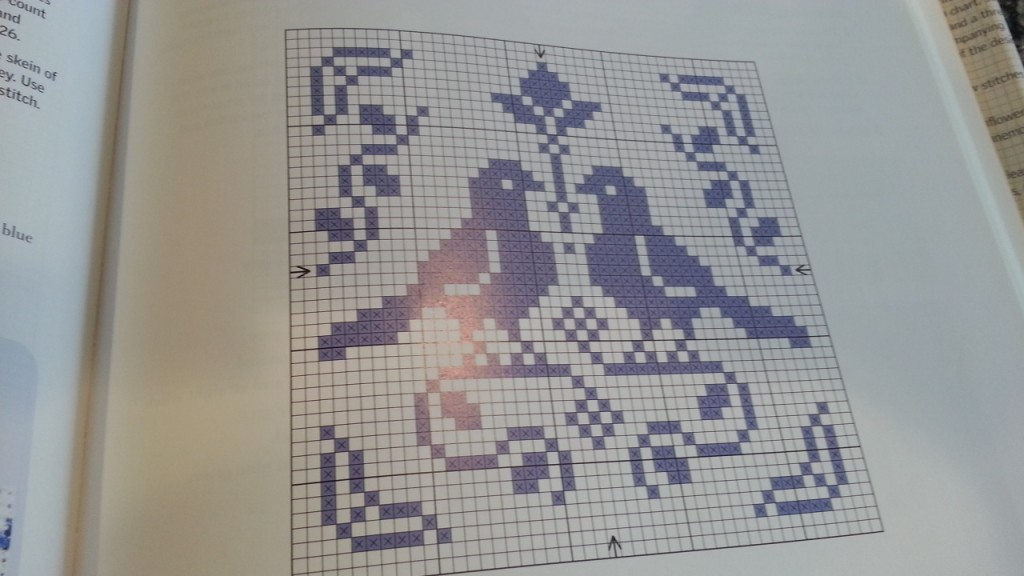 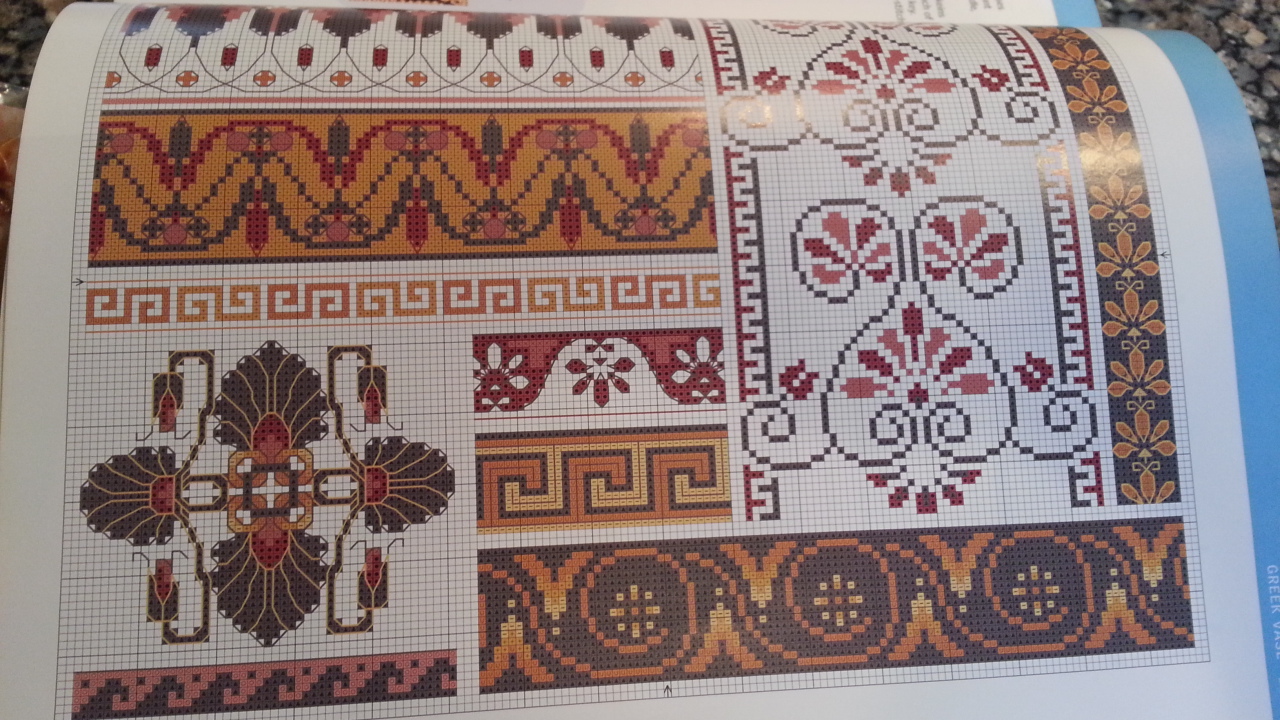 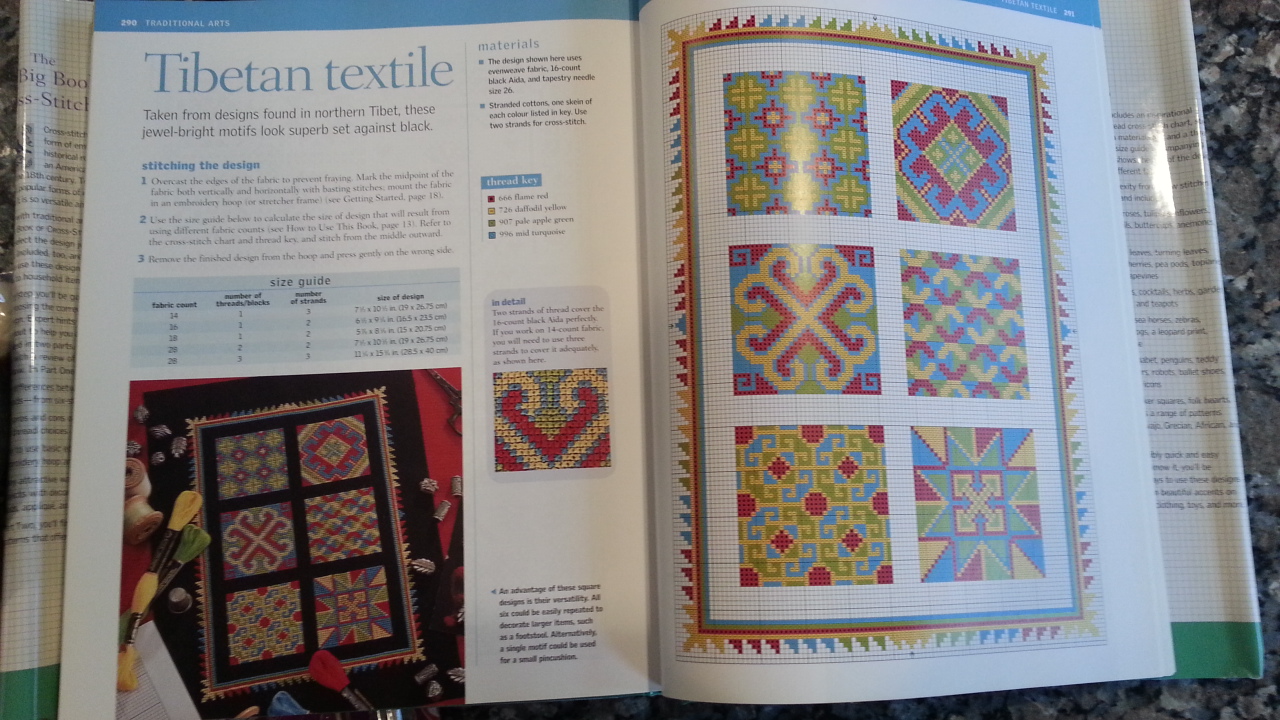 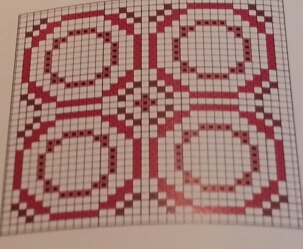 Where do you find inspiration?

Just a quick reminder that some of the Vogue Knitting Live classes have homework!  Rather than wait till the night before, I am going to look at the homework now, over the holidays, and see what I need to do.

Hey! C’mon. This will be my 4th time attending the NYC event, and the first time that I’ve actually planned to do the homework AHEAD of time!  Usually, it occurs to me while I’m packing my bags the night before.  Yeah, sure I’ve survived and everything is fine.  But why not do myself (and you!) a favor and allow it to be completed in a leisurely fashion?  Why not indeed. 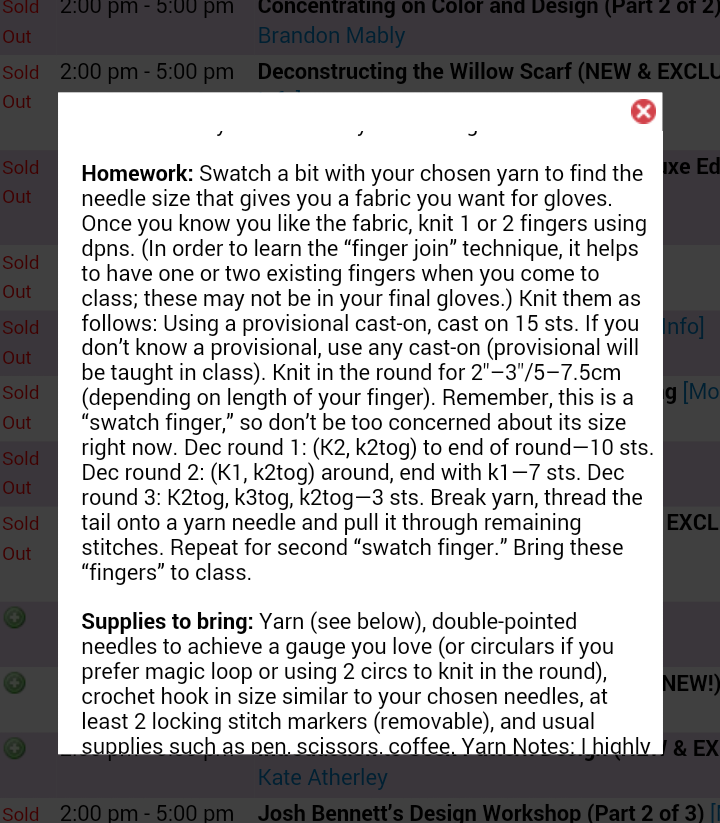 Luckily 2 out of my 3 classes don’t require homework.

Maybe that’s one of the reasons I picked them? (Just kidding!)

…or you know you’re a knitter when you see knitting pattern possibilities when looking at one of art’s great masters. 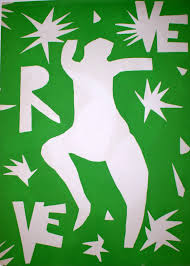 ES was in town for Thanksgiving and took me to the MoMA’s Exhibition of Matisse Cut Outs as a birthday gift.  It was a perfect gift – getting to spend time with my son, going into the city, and going to the MoMA.  (Then, of course, I took him to lunch [at Momofuku Ma Peche, which we spontaneously selected due to proximity to the museum] which we both enjoyed before heading back home.) 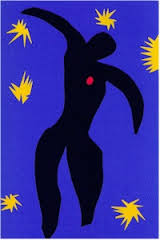 e started doing cut outs from paper when he was putting together designs for his works.  It seems simple enough, I’m sure many of us have done it.  When I first walked into the exhibition, I thought, well, this is interesting but is it really art?  The exhibit also displayed quotes that some people weren’t sure of it either.

But then as his work and the exhibition continued, you can see it evolving from simple paper cutouts to his thought processes… 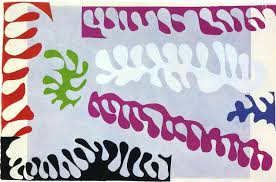 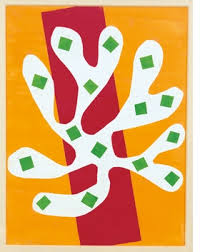 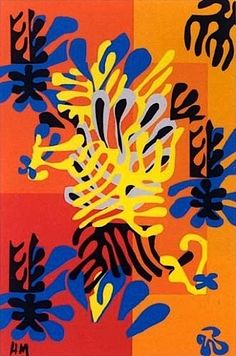 and in some cases, they had the final result – the actual artwork (like a lovely stained glass window) next to its respective cut outs (not pictured in this post).

My son and I discussed how revolutionary these designs were in Matisse’s era.  It may now be deemed more commonplace, though still appreciated (Marimekko and Kaffe Fassett came readily to mind) – which is amazing that we’re seeing its origins!

If you are a fiber enthusiast – knitter, crocheter, spinner, embroiderer, etc. – I’m betting your mind is just humming with these colors and patterns, like mine was!  Designs for a hat, scarf, throw, new color compositions to consider, etc. 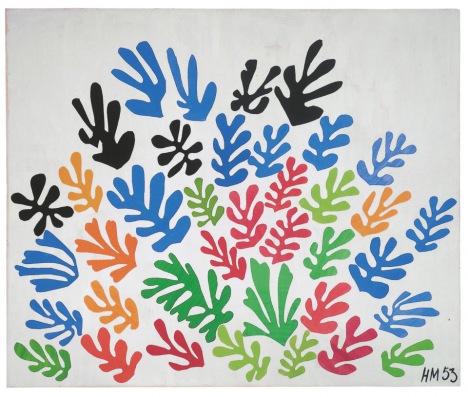 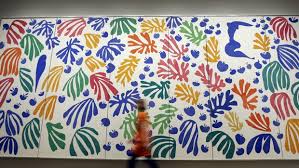 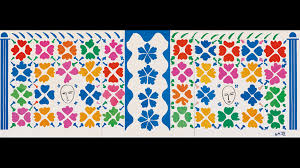 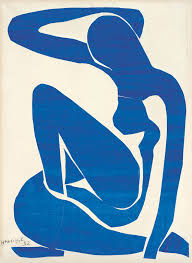 Oh, and if NYC is a schlep for you, but you’re planning to go to the NYC Vogue Knitting Live in January, you’re in luck! The exhibit runs through February 8, 2015. 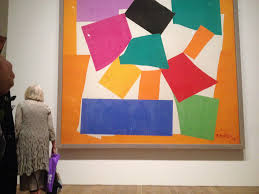 This was one of Matisse’s later cut outs, which was considered a final art piece in itself.

I have registered for the  Vogue Knitting Live 2015 in NYC the weekend of January 17th!

Last year, the person I sat next to in the Norah Gaughan lecture shared her attendance strategy of only attending lectures. She found them very informative and more relaxing.  I tried to do the same this year, but found that there really aren’t that many lectures from which to choose, the price for 3 lectures is almost the same as taking 3 classes, the Marketplace ticket is an additional expense, and worst of all, one would have to wait till a later date to purchase a ticket to the gala dinner.

I also learned in the past that I really have to register early to get the classes that I want. Last year I dilly-dallied over the machine knitting classes, and totally missed out.  So within the hour of receiving the email that regular registration was open, I was there (online)!

I tried to throw in a lecture during Saturday lunch, but it brought the cost up a little more than I wanted to spend.  I tried to do 2 lectures on Sunday instead of 1 class, but again, not worth the expense. I ended up registering via the Broadway Baby package, that includes the Marketplace entrance fee.  I paid for the dinner as a separate expense.  As you may recall from last year’s recount, they give a goody-bag that more than covers the cost of the dinner, not to mention experiencing the wonderful camaraderie with the other guests, speaking the knitting language in a great social setting. 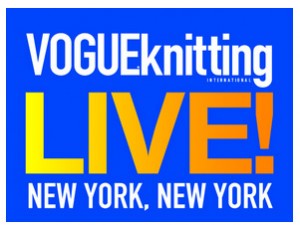 Complete, Completed. Words you don’t often see in my posts! I am happy to report that I have completed two scarves! 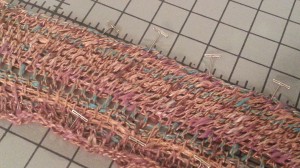 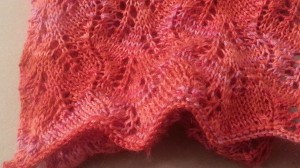 The knit scarf uses Rowan Fine Art yarn that was included in my Goody Bag from the Vogue Knitting Living Gala Dinner. I must say that this offering of knitting treats has truly made my 2014 year of knitting very pleasurable. It has given me the opportunity to try new yarns that I never would have picked out on my own.

The Tunisian Crochet scarf was an effort to see the allure of a finished product using this technique. I had wanted to see the kind of pattern that would be shown by using a larger crochet hook with a finer yarn. 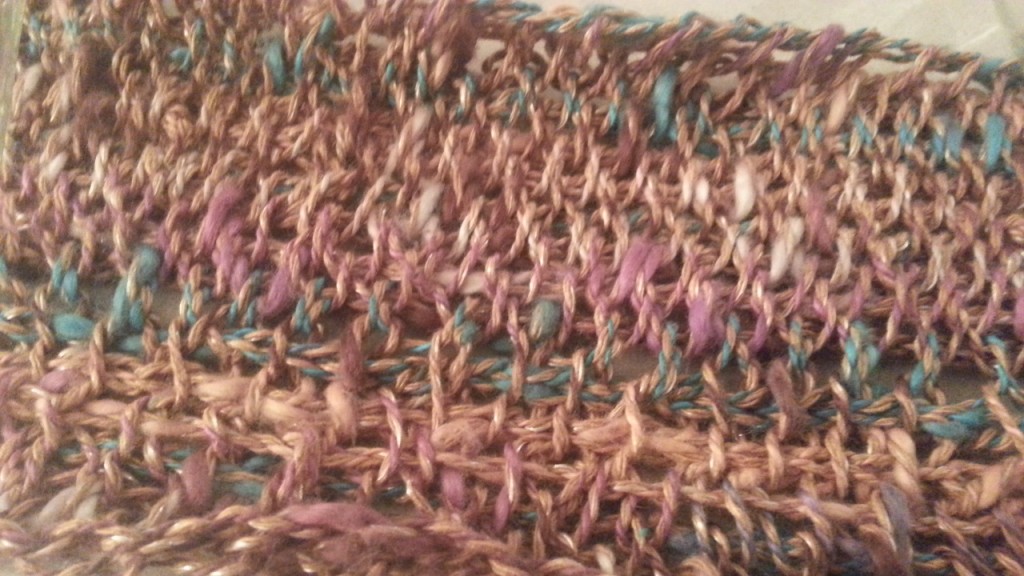 It’s interesting. i don’t think it really looks like either knitting or crochet stitching. 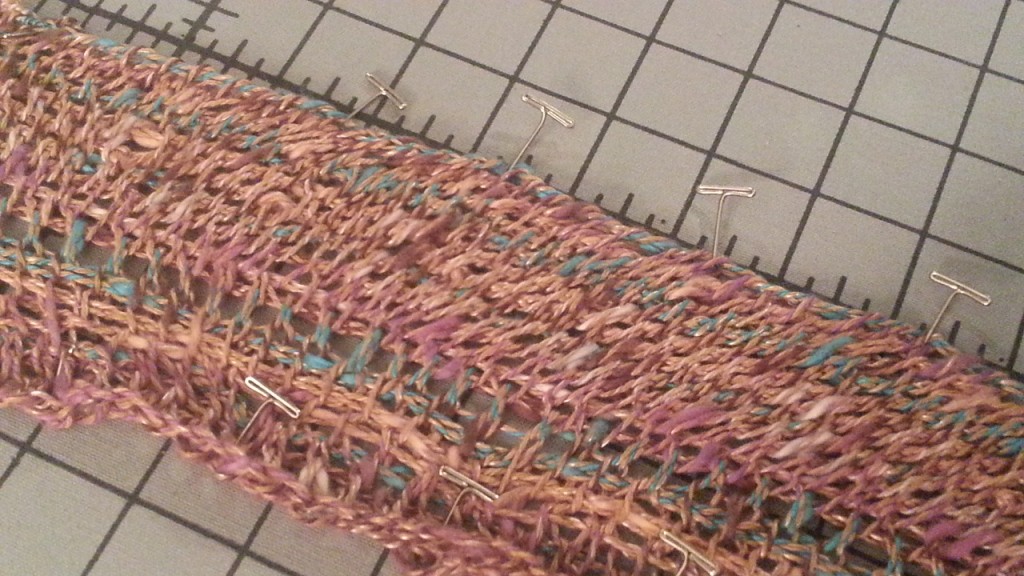 I used a multicolored, multi fibered yarn, that gives the piece additional interest and dimension. 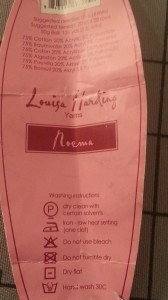 I know I only scratched the surface of Tunisian Crochet, using only one repetitive stitch for this piece.

So what’s next now?  This concept of “completing” could be inspiring… 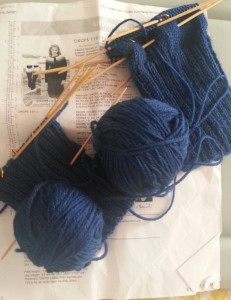 I was so proud of myself for only purchasing 3 items at the Vogue Knitting Live Marketplace.

Of course, the Marketplace was overwhelming, crowded, and expen$ive. It was a better experience to see, touch, compare, and move on.

So what is it about February?  I seem to go crazy for yarn in February!

Aftermath of participating within a knitting community?

Tired of being at home all the time?

Catching up on the knitting magazines while being at home all the time?

Whatever the reason, I appear to stock up on yarn in February.

And no, I’m not beating myself up!  Just noticing a trend…

First there’s the need to make LD another infinity scarf “just like the first one” but in a different color.  She had asked for teal, but do you know that it’s very difficult to find a teal yarn in bulky weight?  I settled for this Knitpicks’ Wool of the Andes bulky in “Spruce” but that was described as having a bit of teal.  It’s not a “fir” green like you would think for a name like Spruce, so I’m keeping my fingers crossed (which is hard to do while I’m crocheting) that she’ll like the color.

While I was at it, I bought this Wool of the Andes bulky “Honey” yarn for me.  Yellow was DDSO’s favorite color, and was actually my favorite color when I was growing up. I’ve noticed that I’ve gravitated toward yellow yarn choices since he died.

But wait, folks, that’s not all!

Somehow (“somehow”) I found my way to the Webs online yarn store. As one of my friends said after my visit, “Oh, that’s dangerous!” Talk about tempting.

Cost is all relative (to the size of your budget) and I escaped relatively unscathed, having found my way to the sale yarns, and also there not being an abundant choice of natural fiber bulky yarns.  With that said, aren’t these pretty?

Every since last year’s VKL, I have been thinking about doing something in beige. (Yes, me!) The color known as Fawn is the new beige. I think it will show stitch definition really well, so I bought two skeins for some kind of small (infinity scarf? LOL) project.  The Red-Orange yarn is a wool-mohair-silk blend made in Italy and hand-dyed in Chile.  It is even lovelier in person than online.

Since my daughter has turned me into a simple crocheter, I decided to see what’s out there in that other world.

And damn those creative folks at Lorna’s Laces and Jimmy Beans Wool! I once again received the email with their Olympic offering (the price drops in relation to the number of medals the US wins) and it is so pretty! Sochi 2014 is a blend of gold, silver and bronze. Who could resist?

Yes, I put in my order. (Also note – the skein is 275 yards.) The good news is that the price will be less, as the US Athletes win more. The other good news is that I’ll be able to make something lovely with this yarn.

Okay, I think the splurging is over. Let the knitting begin (and the crocheting continue)!