Cause and Effect – Does Fate Exist?

I was listening to a radio show, possibly Radio Lab, the other day while running errands. There was a conversation about fate with a quantum physicist who used the example of whether choosing chocolate or vanilla ice cream determines your path in life.  Of course, he denied the plausibility of this concept. 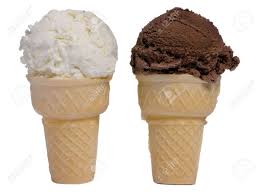 I made some facetious remark on my FB feed about how the discussion only made me crave ice cream.

Geez, that is so not true!

Days, even weeks, later and I am still thinking about it.

Let’s say you chose chocolate, and ended up spilling some on your shirt.  This causes you to take it to the dry cleaner the next day.

Going to the dry cleaner changes the course of your life because you end up running into someone or having a conversation that makes you inspired to look into <x>, and you end up <changing your career, meeting the next person with whom you have a relationship, or trying something new/old/xx> that changes your current direction.

Then again, you could have chosen vanilla, not had any mishaps and continued with your plans.  Does this change the course of your life, or are you following a pre-established script?

I don’t have the answers. Nor do I really have any beliefs around it.

I had a conversation with a co-worker who told me that she feels that “things happen for a reason.” I replied that I don’t believe that, but I do believe that “things turn out, one way or another,” which to me is realistic and non-committal.  However,  my co-worker felt we were saying the same thing.  I disagree because I think her point of view implies some kind of faith, and mine reflects reality.  I guess if faith is your reality then they could possibly be conceived as the same perspective.  But faith, especially blind faith, is not my reality.

I’ve had a week or so to ponder this, and I also realized that Fate and Fatal are similar sounding words.

Interestingly, the full definition of fate is about the end or final outcome:

I’m not really sure where I’m going with this post.  I’m still mulling it over.  I will admit that I believe that certain things will happen, like being in a relationship again, and I do believe in the power of intention.  I also think that once you start thinking about things, you start to notice events or occurrences that relate to your thoughts.  They would still be there otherwise, it’s just that you happen to notice them since they’re on your mind.  Then some people might call it a crazy coincidence, but it’s really just a matter of observation.

Who knows?  I just had to get these thoughts out of my mind and onto (virtual) paper.