Egads! A 4 month reading report? My heavy workload really took away my capacity to read, and then when it was over I felt like I had PTSD to struggle back to normalcy.

Now, it’s mid-August and I am able to focus again. I did a major Kindle-library trip earlier this week and have already finished one book! Ah, but I’m getting ahead of myself. Here’s what I did manage to read these past 4 months.

My all-time favorite was The Rent Collector. 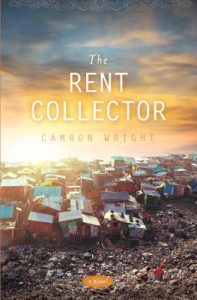 The description does NOT do it any justice at all.

Sang Ly struggles to survive by picking through garbage in Cambodia’s largest municipal dump. Under threat of eviction by an embittered old drunk who is charged with collecting rents from the poor of Stung Meanchey, Sang Ly embarks on a desperate journey to save her ailing son from a life of ignorance and poverty.

The story starts out as a simple premise of a poor family reliant upon the task of picking and selling garbage but then expands its horizons. It examines relationships, circumstances, healthcare, literature, intuition, friendship, marriage, and more. It is totally captivating and enchanting.

I also enjoyed two bestseller mysteries: The Stranger by Harlan Coben and The Life We Bury by Allen Eskens. I often sneer at the bestseller lists – because who says that the people buying the books share my taste in books? But I really wanted to see what Harlan Coben’s writing was like after I read a book review where he was quoted on how he puts together his stories.  All the pieces were presented in a timely manner before the mystery was solved, the relationships and characters’ behavior were believable. I would definitely read another of his books after reading The Stranger.

Allen Esken’s book, The Life We Bury, was also believable and drew me in. It was one of those books that I had to put down at certain times because I just knew that the main character was going to do something stupid. Believable, especially given his age, but still stupid.

I could not omit talking about The Japanese Lover by Isabel Allende.  My journey started as a library book, but I ended up buying it when it was unavailable for renewal.  It’s only rated as Good because it did not draw me back anxious to know what happens to the characters. It was good enough to read to the end, though (somewhat Spoiler Alert) the end was extremely disappointing to me.  I would still recommend it because I flew through some of the chapters, while others…not so much.

So this “month” or time period, I bought more books than I read.  I was taken in by two sales at the Interweave Store and took full advantage of the low prices!  I just noticed that Cristie Prince delivers designs like royalty would wear in Bead Royale, which is only fitting!  Although you’d think she’d change her name to Princess to really make it simpatico.

I’ve enjoyed most of the beading books and videos I’ve perused thus far.  What I’m really getting from all this reference material is that (1) anything goes, (2) I’m more knowledgeable than I give myself credit, and (3) anyone can be an expert.  Also, I like to see what people have to say or what they’ve done and then just mull over their ideas and subconsciously incorporate them into my work.  As Norah Gaughan said at one of the Vogue Knitting Live lectures,  there is nothing truly original anymore.

There may be new ideas or ways of doing things, but they originate from prior knowledge or experiences.

There! Now I’ve done it! I’ve transformed my Reading Report to include the other ways I’ve spent my time (except for golfing) – knitting and beading. Funny how well that worked out!